So I had a birthday this weekend. 31 years ago, I shuffled onto this mortal coil (albeit three months early. It was to be the last time in my life (to date at least) that I would ever be early for anything – I tried it and apparently didn’t enjoy the process.)  Fast forward to Friday night and I was still shuffling, but more in a dancey fun way than a medical emergency kind of way, which was nice.

After a few fancy cocktails, me and some friends went on to a cheesy club. They are the kind of people who dance, quite literally, like no-one’s watching, which was highly educational, and allowed the opportunity to develop what I like to call the ‘Guide to Avoiding Lechy Bastards on the Dance Floor.’

You may be wondering why I spent the first night of my 31st year formulating guidelines for dancing in shit bars.  I’d like to say it was a result of years of meticulous research and rigorous testing but my pants would go on fire. No, these particular tidbits of handy advice were born, as with all the best things in life, out of screaming necessity.  For one reason or another, for the first time in a long time, we were out in a group that was exclusively female and holy tap-dancing bejebus, the difference was staggering. It turns out that it is way harder to dance like nobody’s watching when a bunch of randomers make a point of letting you know they’re watching.

For the entire freakin night.

But we should thank these kings amongst men, because it was their creepy endeavours that brought this humble guide into existence. After the 75th rebuttal of advances from a group who were absolutely, categorically old enough to know better, we decided on a test run of the best ways to deal with such scenarios. I think you’ll find my illustrations are particularly on point and not in any way nightmare-inducing.

I should state for the record that by and large, we had a splendid evening dancing with myriad strangers of both sexes, to the enjoyment of all involved. These moves are designed for the crème de la crème of creepy crawlies – you know the type. The people who deliberately don’t read the room or recognise that refusal to interact means ‘no’ and putting up your hands and actively saying ‘no’ means ‘seriously, fuck the fuck off’. The illustrations below can be deployed by anyone who ever feels the need, so go forth and use your new powers wisely…

Ah, the twirl – an oldie but a goodie, with the added benefit of just generally being fun to do. If you find yourself accidentally making eye contact, throw yourself into said twirl and make sure to be facing in a slightly different direction when you’ve finished. If you have terrible balance, utilize the nearest friend you have to hold your hand and spin you (see illustration). Make sure they are fully prepared to be hospitalised by the inevitable collision that will ensue if you are anything like me at dancing.

A fancier version of the twirl, this will completely remove someone from an unwanted dance encounter and also helpfully lets you completely turn your back on your pursuer. Not recommended for the properly drunk, as it can result in accidental pile-ups and the chance for said pursuer to jump in and offer to assist in the detangling of limbs.

This is a particularly useful one, as it can be utilized pretty much constantly, with varying levels of enthusiasm depending on song and/or energy levels. All you need to do is wave your arms around a lot and just generally flap about. Beware though, as it has on occasion been taken as an attempt to draw the attention of the person you are trying to avoid. This is easily solved though, by accidentally flapping them in the face.

A good one for repeat offenders. If someone is getting too close for comfort and keeps coming back despite constant rebuttals, have several of you form a line and dance between you. Extra points if you somehow manage to turn it into a conga line or a queue for the bar.

Closely linked to The Barrier, this is also good for repeat offenders and is a crackin’ way to help a sister out and potentially make new friends. If you are in a smaller group or see others in smaller groups, band together. This has the added bonus of increasing the likelihood of the aforementioned conga line and/or spontaneous dance-offs. 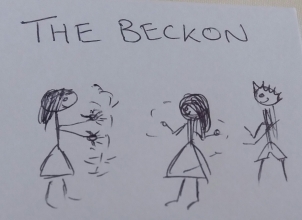 The very nature of dancing can lend a hand to keeping unwanted paramours at bay simply by the fact that if more than one person is dancing in a circle, you can have eyes all over the room. This way, when Captain Creepy comes sneaking up, someone will invariably be able to see him coming. The Beckon can be deployed here as subtly or unsubtly as you like, and can be combined with other moves like the Twirl, to remove anyone from a potentially unwanted surprise grope. 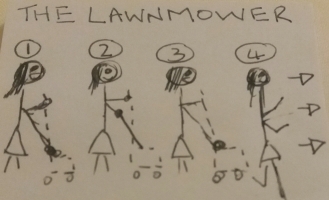 The creme de la creme of defensive dance moves, the lawnmower is both graceful and verasatile. Simply do the ‘pulling starter chord’ motion several times (adding a look of confusion as to why the mower won’t start is advisable at this point). After two or three goes at this, indicate success by having the imaginary lawnmower pull you, completely against your will, out of whatever situation you need to leave. This can be wheeled out for any situation, be it a dodgy dancefloor, a bad date or a boring work meeting. Adding sound effects is encouraged.

The Emergency Bird Manoeuvre – aka. The Nuclear Option 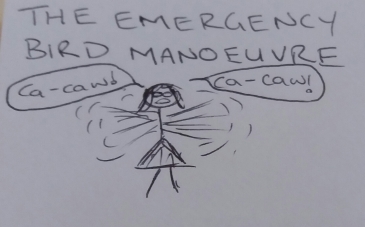 Sometimes, despite all your best efforts, particularly determined ones can get past every defence you put up. The Emergency Bird Manoeuvre works as both a deterrent and a clarion call. It confuses the crap out of the person you’re doing it to, while simultaneously letting others know that someone has got through and is just generally being a pain in the arse. The move is simple, but powerful: raise your arms and flap them while making a loud, high pitched ‘ca-cawing’ sound repeatedly until they go away or someone comes to your aid. For added effect, do it while standing on one leg.

You’re welcome, World. Don’t say I never give you anything.

2 thoughts on “Guidelines To Live By”